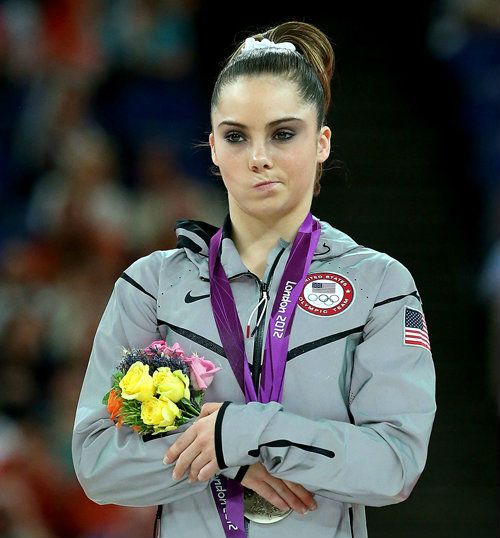 This is a rather infamous picture of an American gymnast exhibiting terrible sportsmanship.

I have spent the last two weekends at two very different types of competitions.  The first, one of my son’s regional gymnastics competition.  His team won State and went into regionals with many of the gymnasts feeling really good about their chances of making nationals.  The second, one of my other son’s State robotics competition. His team was hoping to place high but never expected to win, especially going into the finals in 17th place!

So, what happened?  None of the gymnasts from the State championship team made nationals and the come from behind team won State and is going to World’s next month.

What shocked me and the reason I’m writing this was the difference in the award ceremonies.

Let’s start on the gymnastics side.  Not all of the gymnasts or teams even bothered to go over to the award’s ceremony – they just left.  Medals are given out by age group and when the announcer started with the youngest and planned to give all the awards out by each age group instead of announcing all the winners for each event at one time, my heart fell because I knew what would happen. I’d seen it countless times before.

As each age group finished, most of the gymnasts would walk away from their teams WHILE THE OTHER AGE GROUPS WERE BEING ANNOUNCED and leave. Now my son knows better, his butt would not dare leave that floor even though he knew he was not going to get a single medal. He needs to work on hiding his disappointment in his facial expressions but he is getting better.

Now let’s contrast that with the robotics side. Every team was wildly cheering for the other teams and robots.  There was so much high fiving and hugging and noise it was just insanely fun to be a part of. Not every one of those teams will go to Nationals but every single one of those kids will remember that day for a long time.

We try to teach our kids to be good sports – gracious when they win and when they lose, supportive of their teammates and others in the sport.  It’s an uphill battle though because they constantly see examples of bad behavior that does not get corrected. Everyone has bad days for sure and as the robotics team coach told me yesterday, the team was really down on Thursday – they had had a really bad day but he was so proud of their spirit and determination. He commented that it really shows what a team is made of when things are not going well, it’s super easy to be a great team when everything is going well.

Mom told me a story awhile back that sums it up.  If you know me, you know I’m extremely competitive. I was a kid playing softball and my Mom was cheering for whomever made a good play.  I apparently got so upset by this that I went up to her in the stands and said, if you’re going to root for the other team, you can just leave. Needless to say, she did not leave and she never stopped cheering for any good play!